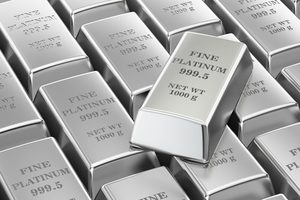 Beautiful, pristine, silver-white platinum is a rare, and thus very expensive, metal. It was first found in South Africa, where people there used it as part of an alloy to create pieces of “white gold” platinum. People in ancient Egypt also loved using platinum (often mixed in with gold) to create beautiful decorative objects as well as jewelry.

According to a report in Chemicool, there are only 5 parts per billion by weight of platinum residing in the crust of the earth. Though the metal is rare, it is still used widely in a variety of industries. It can be seen in catalytic converters, heart pacemakers, pharmaceuticals, and, of course, in expensive jewelry.

The silver-white color of platinum is highly resistant to tarnishing and corrosion. Platinum has been referred to as a “noble metal,” due to this amazing, non-tarnishing quality. It is also a very easy to bend and shape, so it can be used to create wire. Platinum is an unreactive metal, so it doesn’t oxidize, and it’s not affected by acids to which it may commonly come into contact.

This precious metal is sometimes referred to as a transition metal, along with gold, copper, silver, and titanium. These metals all land in the middle of the periodic table, and they have the capability of bonding quite easily with other metals. Platinum has one of the highest densities of the elements. According to the Chemicool website, platinum is 21 times denser than water and six times denser than diamonds. This quality makes platinum a prized metal that contains many practical applications for several industries.

A Few More Facts About Platinum

Platinum is an extremely valuable metal that has a plethora of uses. If you’d like to receive a quote on platinum or any of our other metals, contact us! Avion Alloys offers high-quality materials for aviation and industrial uses.