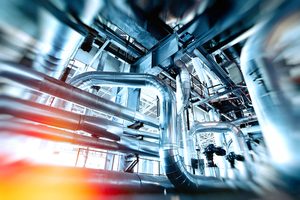 These days, stainless steel is used so widely and in so many everyday applications, most of us probably assume that it has always been around. The truth, however, is that there was another metal that was widely used in the early part of the last century up until the 1950s, when it was replaced by the more versatile stainless steel.

This widely used metal, Monel, is a nickel-based alloy that has a high copper content, usually ranging from 29 to 33 percent. Monel was first created by a metallurgist named Robert Crooks Stanley and was later patented in 1905 by The International Nickel Company. Interestingly, Stanley later became the president of International Nickel, but the name Monel came from the name of the company’s prior president.

Soon after it was patented, Monel became a go-to metal for many industrial uses. By 1908 it was installed as the roofing material for Pennsylvania Station in New York City. By the 1920s, it was widely used in many applications, including as material in kitchen sinks, cookware, and countertops, as well as in roof flashing.

There are six different types of Monel alloys, all with a large amount of nickel and other elements in the mix, including iron, carbon, manganese, and/or silicon. Some Monel alloys include aluminum and titanium in the mix, which creates a stronger alloy (K-500) at elevated temperatures. Alloys that hold their strength in elevated temperatures are ideal for use in the aerospace industry. As Monel alloys are highly resistant to corrosion, they have been used widely in chemical plant applications.

The Pros and Cons of Monel Alloys

The great popularity of Monel alloys before the 1950s came about because of its many positive properties, including its attractive appearance, low cost, strength, and supreme corrosion resistance. In some scenarios, the alloy presents unfavorable traits. When exposed to certain chemicals like nitric oxide or nitrous acid, Monel alloys can corrode. They can also become discolored with a patina that is not always welcome for certain uses.

Although the popularity of Monel alloys has dwindled since the introduction of stainless steel, this alloy continues to serve a variety of industrial purposes. Contact Avion Alloys to receive a quote on Monel and its alloys. We pride ourselves on providing top-quality materials to our clients.