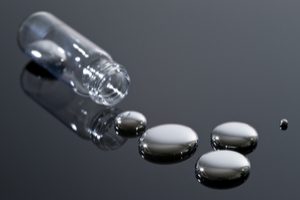 Mercury is a heavy metal that contains many useful and fascinating properties. It is nicknamed “quicksilver,” and it is the only metal that retains its liquid form at “standard conditions for temperature and pressure.” The metal exists in deposits in the ground in the form of mercuric sulfide, or cinnabar. Mercury’s red pigment is called vermillion, and it can be extracted by putting natural cinnabar through a grinding process.

Mercury is a potentially toxic substance. A person can be poisoned if exposed to mercury, whether exposure consists of inhaling its vapors or ingesting it. Mercury was commonly used in home thermometers, but these have generally been phased out due to the dangers of exposure to the substance.

The Many Uses of Mercury

Mercury has long been used in many devices (besides thermometers), including barometers, mercury switches, mercury relays, and fluorescent lamps. Though, as mentioned, mercury is no longer used in many clinical situations, it is still used for scientific research and as an amalgam for dental products. In fluorescent lighting, electricity passing through mercury vapors create ultraviolet light waves. These waves then create light from the phosphor that’s inside the fluorescent tube.

Other Interesting Aspects of Mercury

Mercury and the Mad Hatter

According to wikipedia.com, “Mad Hatter syndrome” was a real disease that came from the high number of hat makers who contracted mercury poisoning from working with mercurous nitrate, which was used to cure the felt material in hats in old England. Mercury poisoning can cause serious neurological disorders that affect the brain and organs. The name “Mad Hatter syndrome” was derived from the Mad Hatter character in the book, “Alice in Wonderland,” by Lewis Carroll.

Mercury may be toxic, but its many uses make it a viable material in technology. To receive a free quote on Mercury, contact Avion Alloys. We offer high-quality materials in peak condition made for industrial use.