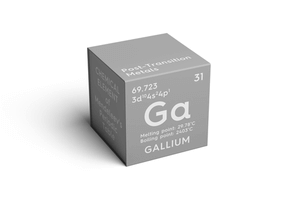 Gallium in its solid form is a crystalline metal with a deep blue-gray hue that turns to silver in its purest form. Like mercury, gallium changes from a solid at room temperature to a liquid when heated. Even its solid form is soft enough to be cut with a standard knife. It can be dissolved with alkalis and acids but is stable at room temperature.

What Are Gallium’s Uses?

Glass can be coated with gallium in its liquid form to create a shiny, mirror-like surface. It can be combined to form low-melting alloys with most other metals. For example, nuclear weapons have plutonium pits that are stabilized using a gallium alloy.

Many companies use Gallium in the production of lasers and light-emitting diodes, along with integrated analog circuits. It can also be used in thermometers to measure high temperatures.

How Gallium is Extracted

The pure form of gallium does not exist in nature. In diluted form, it is widely dispersed and is not a primary target of extraction. Gallium gets removed along with other ore deposits, such as coal and bauxite.

How Does Gallium Affect the Body?

This element is found in minuscule amounts in humans. A person who weighs 100 kilograms would contain about 1 milligram of gallium. It has no known role in or impact on bodily function and likely comes from trace amounts in food, water, and air. Pure gallium can be safely touched by humans, though it will melt and leave behind a stain when handled.

Some compounds, such as gallium chloride, can cause serious health problems such as:

However, these health effects are rare.

How Does Gallium Impact the Environment?

The use of gallium in nuclear weapons is controversial. This element has to be removed from plutonium to be extracted, but the removal process causes radioactive pollution. Removing the gallium to turn the plutonium into fuel is also very costly. Although research on cleaner removal methods is ongoing, it could take many years before a new solution is created.

Although gallium itself isn’t directly harmful physically, it can have a huge impact on the environment. At Avion Alloys, we know the importance of having a reliable source for all your metal needs. Our long-term commitment with producers ensures availability of stock, continuity, and reliability. Contact us today for a free quote.